Giuseppe and Sacha grew up with a common love for food, cooking, and countryside, in a tableaux of sophisticated entertaining and refined lifestyles.

The daughter of an Italian diplomatic family, Sacha was exposed to life around the globe, and with it a mélange of culinary traditions. Her cultural makeup is Italian, however, and her heart has long been tied to Tuscany, where, growing up, she spent summers with her grandmother (and met Giuseppe). In the kitchen she had a wealth of teachers. She learned to cook from her adored Venetian nanny, Lena, from her Tuscan grandmother, and from her mother, who managed to put together lunches for a dozen in hours and for hundreds in a few days. A passion for visual art eventually led Sacha to a career in auction houses and galleries in England, but food and lifestyle have been companion loves in her life.

Meanwhile, Giuseppe, son of a business magnate, grew up between Veneto and Tuscany, and learned about food from his Venetian grandmother, who loved to prepare freshly caught fish. He was both gluttonous and curious in the kitchen, and soon he was cooking for friends in an ever-growing circle, eventually opening restaurants in Umbria and Warsaw. Complementary passions in his heart, though, are love for the land, viticulture, and the cultivation of trees for wood. He studied agrarian sciences and later pursued a series of activities that would bring him back to the earth. Food was never far. 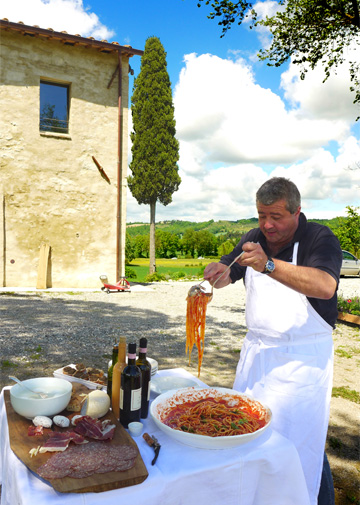 This dual passion for cooking and entertaining have bonded Sacha and Giuseppe since they met, and their kitchen accommodates and pleases dozens effortlessly and delightfully. Well-traveled polyglots and gracious hosts, they lend ease, sophistication, and good company to the experience of cooking and dining in a gorgeous but unpretentious setting. 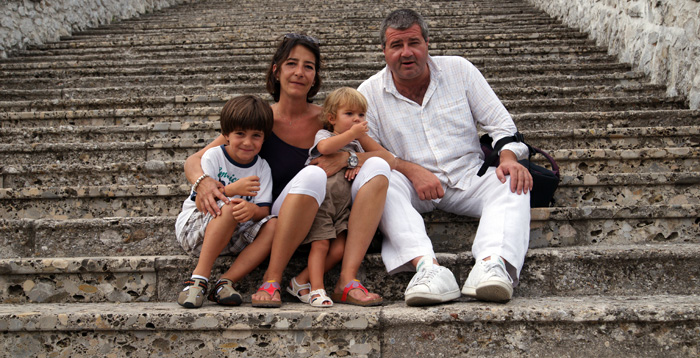 With Francesco and Livia on a family trip, 2012.

One thought on “WHO WE ARE: A TABLE OF DESTINY”

This site uses Akismet to reduce spam. Learn how your comment data is processed.